In the 18th century, people enjoyed watching dog fights which were legal until 1835. Breeders bred Bulldogs, who were the forerunners of Staffies, for bloody fights with bulls and bears, and for dog fights, as well as for the extermination of sewer rats. But they never used any of these dogs against humans.

Bulldogs were popular. However, their owners worried that they were focused only on strength, but were not fast enough. For this reason, breeders began to crossbreed them with Terriers. They wanted not only a brave and strong dog, but a nimble and quick one as well.

THE DUKE OF HAMILTON - “FATHER” OF THE STAFFORDSHIRE BULL TERRIER BREED

The Duke of Hamilton from the English town of Stafford was known as the "Father” of a new breed of dog called the Staffordshire Bull Terrier. In addition to Bulldogs, the Duke also bred other dogs, e.g. Terriers. His dogs were admired by experts and the public. Wealthy aristocrats wanted to obtain their puppies only from him.

He worked systematically on the interbreeding of dogs. Unlike other breeders, he had experience in the breeding of racehorses. He tried to combine distantly as well as closely related breeds to obtain a hybrid of the muscular Bulldog and the smaller, more mobile Terrier. In about 1770, he finally managed to breed a race of Staffordshire Bull Terrier. The one which we know today.

Staffies gained popularity because of their social nature. In the 18-19th centuries, people of all social classes — particularly families in Central England — owned Staffordshire Bull Terriers. The dogs lived in the environment of people and children. Due to this, their nature took on a positive form.

THE FIRST STAFFIE BREEDERS' CLUB AND OFFICIAL RECOGNITION 80 YEARS AGO 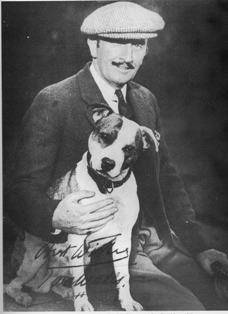 In August 1935, three months after the recognition of the breed by the Kennel Club, organisers held the first official Staffordshire Bull Terrier Show in Cradley Heath in the West Midlands. The Show was attended by 60 dogs and bitches.

In 1987, the World Canine Organization FCI recognised the breed internationally. The first Staffordshire Bull Terrier bitch was brought to the Czech Republic in 1989.

MYSTERIOUS SYMBOL OF THE BREED. DOES THE STAFFORDSHIRE KNOT ORIGINATE FROM AN EXECUTIONER, MONKS OR MINERS? 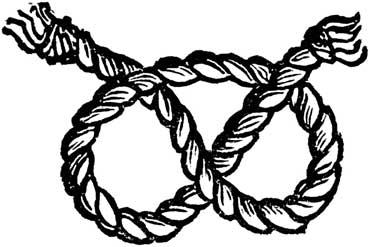 However, the origin of the Knot is a mystery. According to legend, when three convicted criminals had to be executed together, there was a dispute over who should be hanged first. The executioner solved this problem by creating the Staffordshire Knot above their heads to hang all three together. This may or may not have happened in this way.

The more probable variant of the origin of the Knot is that it is a Celtic Christian symbol which was passed around in Staffordshire by missionary monks.

Another story is that Staffordshire was a mining region. Miners worked there under very difficult conditions. In the low shafts, where the coal vein was often narrower than 40 centimetres, miners had to dig in a very confined space, sometimes even lying down.

The only connection between a miner and his colleagues was the rope tied behind him to his belt. If necessary, a miner could be pulled out of the shaft by means of the rope. Human lives depended on the strength of the Knot.

UNCLEAR LEGEND BUT THE CURRENT SYMBOL OF THE KNOT IS OBVIOUS

Unfortunately, we still do not know how the Knot became the Staffie symbol. However, one thing is certain. The Staffordshire Knot symbolises values such as friendship, solidarity and trust between dog and master. The Staffordshire Bull Terrier is probably the only dog breed worldwide to have its own symbol. We at Slade Czech add the symbol of origin to our dog collars and dog leads.

Staffies now rank among the most popular Terrier races, with their popularity among breeders growing. They are courageous, reliable, sociable dogs, devoted and good-natured. They love their families and like to play.

Our four-footed friend, Ken, is also such a pooch. Just like the Staffies, we, the saddlers at Slade Czech have our story. Read how we started. And follow our blog.

A Look Inside Manufacturing Of Slade Czech’s Hardware for Leather Collars Designing and manufacturing of a new type of fitting takes us a little time, but ... Next

„Woof, Ken, where did you get such finery?“ marvelled a pretty Staffordshire Bull Terrier a few days ago. Since then, dressed to the nines, I regularly break girls’ hearts. A hand-stitched collar in fragrant cowhide decorated in shiny metal with a Staffordshire knot simply attracts the ladies.

Collars, leashes and other canine harness made by Slade Czech saddlers are also available in bright colours for canine ladies. Don’t forget a dog tag to complete the outfit.Take your pick.

„Where's my collar?“ I wonder. I see the master has pinched it to wear like a bracelet. Again! So I asked the master saddlers and we devised leather accessories for humans too. Check out the bracelets in colourful cowhide, aromatic keyrings and keychains, leather wallets and coasters. Everything in Staffie style. Make your choice.