THE HISTORY OF DOG COLLARS

It is difficult to say who the first person was to tie a rope around a dog’s neck and attempt to lead him like a horse or a camel. However, DNA analysis has proved that the first domesticated dog breeds already accompanied European hunters 32 000 years ago.

Naturally, these dogs were bred from wolves. A Scandinavian legend has it that wolf packs chased after groups of hunters to feast on the food scraps left by the men. And, in return for the food, the wolves protected the hunters by their advance warning howls of approaching danger, e.g. in the form of a hungry bear. 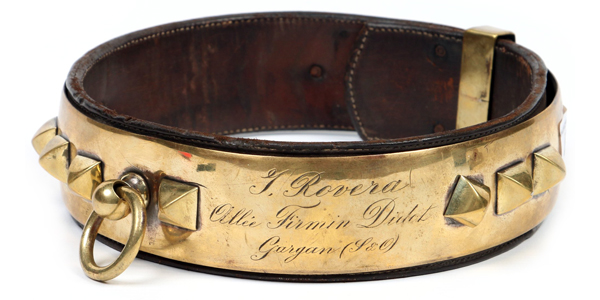 We will never know whether this legend is true. However, the truth is that man has always liked to be surrounded by loyal dogs. One of the first illustrations of a master with his dog on a lead dates back to 4 500 years before Christ, on mosaics which were found in Pompei, Italy.

In Ancient Egypt, dogs were a part of the Pharaoh’s security. As a symbol of importance, their necks were adorned with brass collars decorated with precious gems. Some Pharaohs respected their dogs so much that they had them mummified and buried together with them. In Greece during the same epoch, by contrast, dogs served as watchdogs for herds of cattle or horses. It was precisely Greek farmers who first made barbed collars for their dogs to protect the sensitive dogs’ throats in battles with wolves.

The Renaissance had a major influence on the human perception of the dog. Many pet dogs began to have a sovereign status in their families (even in royal families). The dog of King Louis XI wore a real item of jewellery around his neck - a gold-plated collar decorated with rubies. Leads were traditionally held in the left hand at that time, because the right hand was intended to hold a weapon. English Bandogs were kept on a lead all day long, in order to enjoy free movement during the night while guarding their masters’ property.

With the onset of industrialisation, it became common for a dog to have a small padlock on the collar. The real owner was proved by being able to unlock the padlock. Popular metal dog tags, bearing the names of the dog and master, also became popular.

In the 19th century, some races continued to be bred mainly for hunting foxes, ducks and other game. On the other hand, from childhood, girls, ladies and wives kept selected breeds, such as the Italian Greyhound. These dogs were their fashionable accessories and loyal friends. Leads and collars were decorated with lace, embroidery, or hand-painted.

Currently, the Flexi self-winding leash is popular for walking a dog, the wooden prototype of which was made in 1972. It is still manufactured in Germany, which annually exports millions of these items worldwide. And it is no wonder! The dog is the world's third most popular pet. Can you guess which two animals stole the dog's top position? Second place is occupied by the cat – and the most popular ... the fish swimming in family aquariums.

A Look Inside Manufacturing Of Slade Czech’s Hardware for Leather Collars Designing and manufacturing of a new type of fitting takes us a little time, but ... Suivant